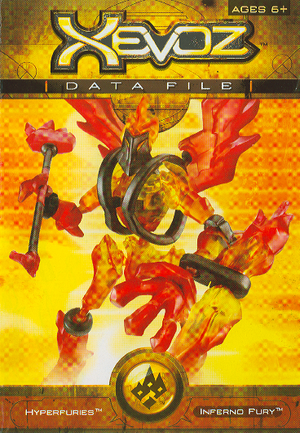 Inferno Fury are fire elementals of the Hyperfuries.

Beings of pure fire. Created in ancient times to battle dragons in the Hoarfrost Mountains. Carry lethal flame weapons forged deep in the bowels of the Earth. Powered by hearth stones and the energy of the sun. Rarest of all Hyperfuries.

Retrieved from "https://xevoz.fandom.com/wiki/Inferno_Fury?oldid=4197"
Community content is available under CC-BY-SA unless otherwise noted.